NASHVILLE, Tenn. --- Managing limited resources, proactively approaching crime and delivering quality services to citizens on a smaller-than-average staff are among the efforts that have led Brentwood to be consistently ranked as one of the state’s safest cities. In 2013, the city was ranked as 30th safest city in the country by NeighborhoodScout.com and presently has no unresolved homicide or violent crime investigations pending. 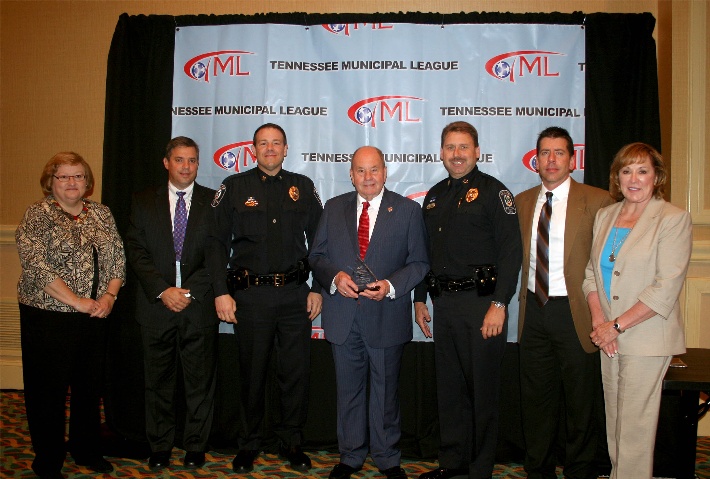 In recognition of Brentwood’s outstanding efforts to employ best practices within its police department -serve, protect and keep the peace - the Tennessee Municipal League today awarded the city with an Excellence in Police Services Award.  The award was presented during TML’s 76th Annual Conference at the Nashville Convention Center in Nashville.

The Brentwood Police Department is the most tenured accredited agency in the state of Tennessee and has been internationally accredited and recognized by the Commission on Accreditation for Law Enforcement Agencies (CALEA).  The agency has also been recognized as a “Meritorious Agency” based on tenure, a “Flagship Agency” based on merit, and most recently received their 2014 award “With Excellence” for completing the Gold Standard Assessment.

“Building and maintaining strong community relations continues to be a priority of the Brentwood Police Department, which proudly oversees 45 active Neighborhood Watch groups,” said Rex Barton, an MTAS police consultant. “Through partnerships with neighborhoods, schools, businesses, civic organizations, and churches, agency personnel strive to instill confidence and build trust throughout the community while promoting a desirable quality of life to the citizens they serve.
Barton said Brentwood provides excellent services to citizens despite having a staffing level below the state and national averages for number of officers per unit of population. To help maintain a high level of service to the community, the agency implements a stringent selection process to recruit and hire the best candidates, maintains current and legally sound policies and procedures, provides mandatory and specialized training for all agency personnel, and provides personnel with state-of-the-art equipment and technology.

Brentwood Police Chief Jeff Hughes said the credit for his department’s success is rooted in the individuals who make up the police force and their dedication to the community.

“I am very proud of the men and women that comprise the Brentwood Police Department and I consider it an honor to lead such an esteemed group of professionals in this internationally accredited agency,” Hughes said. “Our members are mindful of their role as public servants and take pride in providing the highest quality service possible to our citizenry.  To be recognized by TML for Excellence in Police Services for what we consistently strive to accomplish as an organization, day in and day, out is indeed an honor.”

Since the inception of the Brentwood Police Department in 1971, only three people have held the position of chief of police. The position is currently held by Chief Jeff Hughes, who was selected to head the agency in 2012 and has spent 28 years with the department.