Emergency response functions within Brentwood Fire & Rescue include fire suppression, emergency medical first response, technical rescue and hazardous materials response. This is primarily a responsibility of each shift, which operates on a 48 hour-on / 96 hour-off schedule. Each shift (A, B, and C) is led by a Battalion Chief, who serves as the Shift Commander. Chief Windrow came to Brentwood in 1996 as the Training and Safety Officer. He retired as a Chief Master Sergeant from the Air Force Reserve and previously served as a Battalion Chief in the Department of Public Safety at the Dallas/Fort Worth International Airport. David holds a Master of Public Administration and a BS in Emergency Administration and Disaster Planning from the University of North Texas. He also has an Associate of Applied Science degree in Fire Protection Technology. Chief Windrow has also obtained his Executive Fire Officer (EFO) designation through the National Fire Academy, and in 2010, earned his Chief Fire Officer (CFO) designation through the Commission on Professional Credentialing at the Center for Public Safety Excellence.

Scott Ellis serves and Battalion Chief for A-shift. Ellis joined Brentwood Fire and Rescue in January of 1992 with the addition of Station 3. A native to the middle Tennessee area, he rose through the ranks of Firefighter, Engineer, Lieutenant, and as July of 2011, promoted to the rank of Battalion Chief, serving as the Shift Commander for C-Shift. Chief Ellis manages the department’s Special Operations / Technical Rescue program, and is a Specialist on the Hazardous Materials Team. He also maintains his Paramedic certification, and serves as a lead instructor for Brentwood's Citizen’s Fire Academy and the Tennessee Fire & Codes Academy. Brian Collins serves and Battalion Chief for B-shift. Collins began his fire service career in 1995 in Kentucky, joining Brentwood in 2002 as one of the sixteen firefighters hired with the construction of Station 4. After serving as a Firefighter/Paramedic, Engineer, and Lieutenant, Brian promoted to Battalion Chief in October 2013, as the Shift Commander for B-Shift.  Chief Collins obtained his BS in Fire Protection Administration from Eastern Kentucky University & his MPA from Tennessee State University.  A graduate of the National Fire Academy's Executive Fire Officer Program, he also holds the “Chief Fire Officer” designation from the Center for Public Safety Excellence, & has presented a variety of courses at the local, state, & national levels. David Harber serves and Battalion Chief for C-shift. Harber began his career with Brentwood Fire and Rescue in July of 1995 after having served in the Army Reserves and completing a Bachelor of Arts degree from the University of Tennessee. Born and raised in Tennessee, he moved through the ranks of Firefighter, Engineer, Lieutenant, and promoted to the rank of Battalion Chief in January 2014, serving as the Shift Commander for C-Shift. In 2016, Chief Harber obtained his Fire Officer designation from the Center for Public Safety Excellence.  David currently serves as the Program Manager for the Awards and Recognition Committee. He spent three years as a firefighter for the North Coffee Volunteer Fire Department and is a member of the Army National Guard, serving two tours of duty in Iraq. 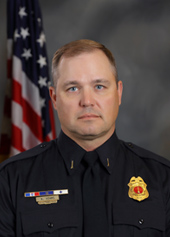 Nicholas Adams serves as the Division Chief of Training and Risk Management. Adams began his fire service career in 1996 in Alabama, joining Brentwood Fire and Rescue in 2002. Adams rose through the ranks of Firefighter, Engineer, and Lieutenant before being promoted to Division Chief in September 2018. Chief Adams holds the “Fire Officer” designation from the Center for Public Safety Excellence and is certified as an Urban Search & Rescue (US&R) Rescue Specialist through the Texas A&M Engineering Extension Service. In 2012, Chief Adams retired from the Alabama National Guard with 20 years of service.

Chief Pender is a 22-year veteran of the fire service.  He started with the city of Brentwood in 2002 as a firefighter and worked his way through the ranks to his current position as Division Chief in the Office of Community Risk Reduction.  Chief Pender serves as the Fire Marshal, principal Fire Investigator, and Public Education coordinator within the Office of Community Risk Reduction.  Chief Pender holds the “Fire Officer” designation from The Center for Public Safety Excellence and obtained his Bachelor’s Degree from Milligan College in East Tennessee.  An Advanced EMT, he also spent 12 years with the National Disaster Medical System as part of the TN-1 Disaster Medical Assistance Team (DMAT), serving on deployments to Louisiana and Florida during Hurricanes Gustav and Irma.