The Holt family moved to Tennessee from North Carolina around 1800 and by 1808 had settled in what is now Brentwood. In 1853 Thomas Holt, grandfather of John P.Holt, built the beautiful two story brick Greek revival house which still stands a short distance from Crockett Road and is listed on the National Register of Historic Places. John and O’Delle Holt married in 1924 and made their home at Holtland, now Wildwood. In 1929 they built a modern house near the big house and lived there. John worked the 1,200 acre farm for much of his life. His sister Kate Holt Witherspoon lived at Holtland with her husband and son Charles. By 1965 Charles was the only one left living in the big house and he decided to shutter the house and move in with his aunt and uncle.

In 1984 John decided to sell about 900 acres of the Holt Property, which is now the Raintree Forest neighborhood. John died that same year at the age of 94 and O’Delle passed away nine years later in 1993. Charles sold the remaining 264 acres in 2015 and continued to live in his home on the remaining 8.5 acres until his death in August 2017 at the age of 90. The antebellum house has been sold to a new family and is now being restored to its former glory.

In 1985, O’Delle wrote in her will that the City of Brentwood would receive a sizable gift to either establish or maintain a public library as long as it was named after her beloved husband. Upon her nephew’s death, Mrs. Holt’s will divided the proceeds from the Holt property between the City of Brentwood (for the Library) and the Brentwood United Methodist Church where the Holts and Mr. Witherspoon were life-long members. Mr. Witherspoon was the organist there for 43 years. Education and learning were important to both John and O’Delle. Mr. Holt raised money to pay off Williamson County’s first brick-and-mortar public library, the War Memorial Library, in 1950. Mrs. Holt taught school at Lipscomb Elementary School. One person who remembered O’Delle fondly said “O’Delle Holt would have been in awe of The Brentwood Library. She wanted nothing more than to have a wonderful place for children to have access to books.” The City of Brentwood is honored to accept the very generous $4.2 million gift and the Library is now known as The John P. Holt Brentwood Library.

BRENTWOOD, TN –  On Thursday, December 6, 2018, the Mayor and the Brentwood City Commission, along with the Friends of the Brentwood Library, the Library Board and the Historic Commission presented two plaques at the John P. Holt Brentwood Library.   The plaques are to commemorate the $4.2 million donation to the library in 2017 from John and O'Delle Holt and the unnamed enslaved people who worked the Holt farm.  At the event, Brentwood Mayor Jill Burgin said, “These plaques will remind everyone who enters the city's library that the full story of our community's heritage needs to be shared and that the Holt family's commitment to their community will last for generations.” 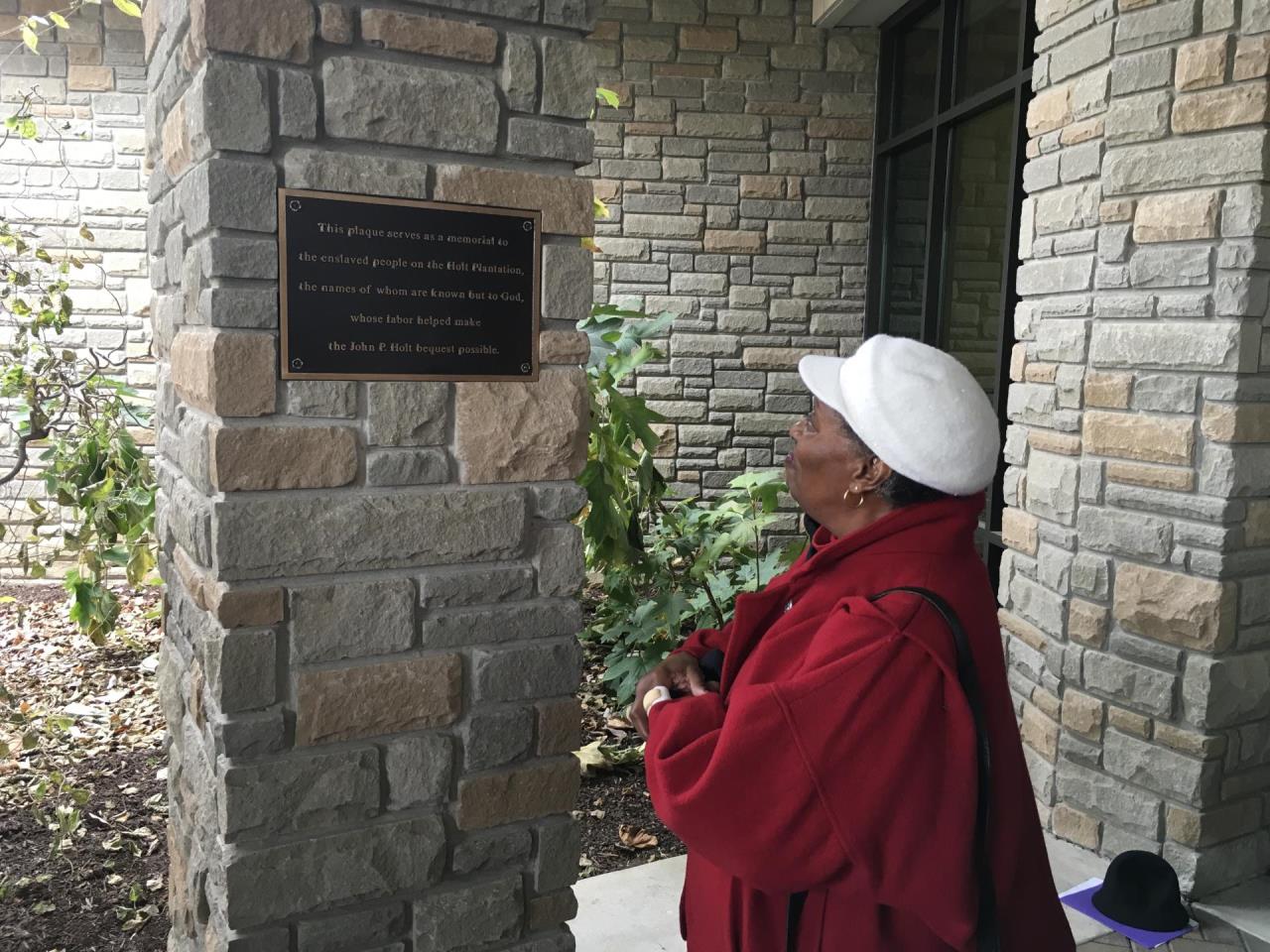 The dedication ceremony began in the library meeting rooms and followed the annual lunch hosted by the Friends of the Brentwood Library.   The guest speaker, Tina Cahalan Jones from the African American Heritage Society of Williamson County, was accompanied by Carolyn Hatcher, a great-great granddaughter of Lucretia Holt, an enslaved woman who was born on the plantation around 1833.  During the plaque unveiling, Hatcher stood smiling at the plaque meant to honor her ancestors.

Mayor Burgin said, “it's important also to honor the unnamed enslaved people who worked the Holt farm, but whose history here is not as well known. Without their work, the Holt family fortune would not have been possible.”  Brentwood Commissioner and Historic Commission member, Anne Dunn, said “the Holt family has been in this community for many generations.  Ms. O’Delle Holt chose to share their good fortune with the residents of the city.  It is befitting that the plaques will recognize both the family with its long stewardship of the land and the enslaved people who worked it.”

“The Holt family were founding members of the original Williamson County Library,” said Brentwood Commissioner Betsy Crossley who also serves on the Brentwood Library Board.  The Holt family has a long history as library advocates. We wanted to have a visible and permanent reminder to recognize their generous contribution to our library,” Crossley added.

“I hope citizens will read these plaques and be very thankful for what our predecessors did for future generations,” said Brentwood City Commissioner Ken Travis.  “Their hard work and vision allowed for a very generous gift to Brentwood.  This much appreciated gift will be used now and for generations to come,” added Travis. 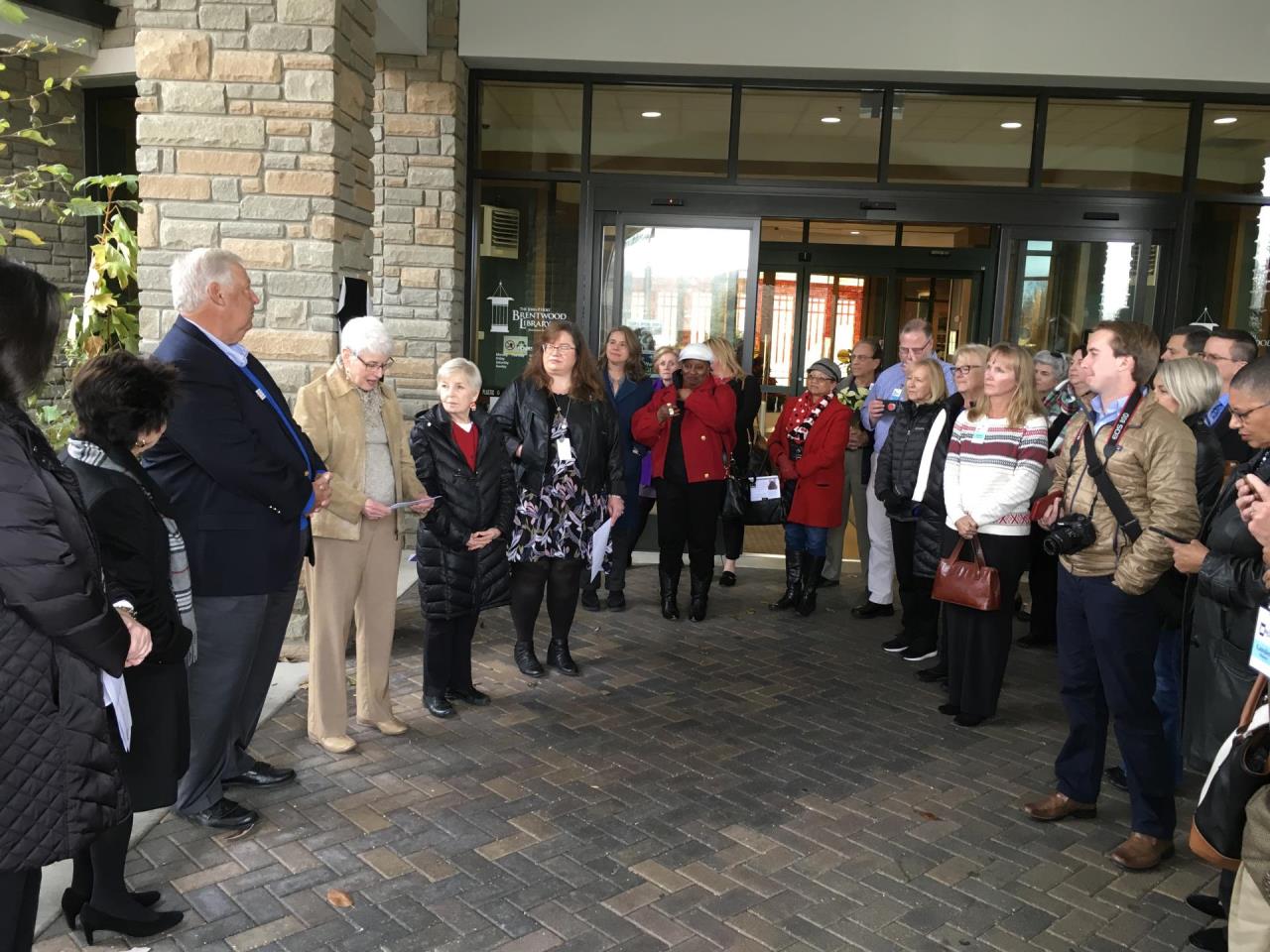 John Page Holt married O’Delle Kelly, of Waco, Texas.  They lived in the historic home for a while, then built and lived in another home on the property.  Mrs. Holt was a teacher at Lipscomb Elementary School.  Mr. and Mrs. Holt had no children, but Mr. Holt’s nephew, Charles Witherspoon, Jr., lived with them.  Mr. Witherspoon lived on the property from the time he was two years old.  He became a teacher and musician and served as the organist at Brentwood United Methodist Church for 43 years.   Mr. Witherspoon died in 2017.   The property was operated as a plantation in the 1800s and various reports indicate between 14 and 100 slaves worked on the plantation over the years.  You can read more about the family and its history online.

The City of Brentwood John P. Holt Bequest Account (hereinafter referred to as the “Holt Account”) shall be established and maintained with the funds provided by the estate of O’Delle K. Holt.  Acceptance of said funds was approved by Resolution 2017-78 of the Brentwood City Commission on October 26, 2017. At the time of acceptance, the balance of the funds totaled approximately $4,200,000.

The Holt Bequest shall be administered in accordance with the following:

The investment of Holt Account funds shall be in accordance with the adopted Investment Policy of the City of Brentwood, as well as applicable State law.  This includes the primary objectives, in priority order, of: a) Safety of Principal, b) Liquidity, and c) Yield.

Seventy-five percent (75%) of the funds shall be designated as “Endowment Principal.” The Endowment Principal shall remain intact and shall be invested to produce an interest return (“Endowment Return”) that may be used for projects meeting the definition of an “Approved Use,” as set forth below.

Twenty five percent (25%) of the funds shall be designated as “Short-Term Project Funds.”  These funds shall be available for expenditures on projects meeting the definition of an “Approved Use”, as set forth below.

Projects eligible for funding with either Short-Term Project Funds or Endowment Return must meet the following requirements: