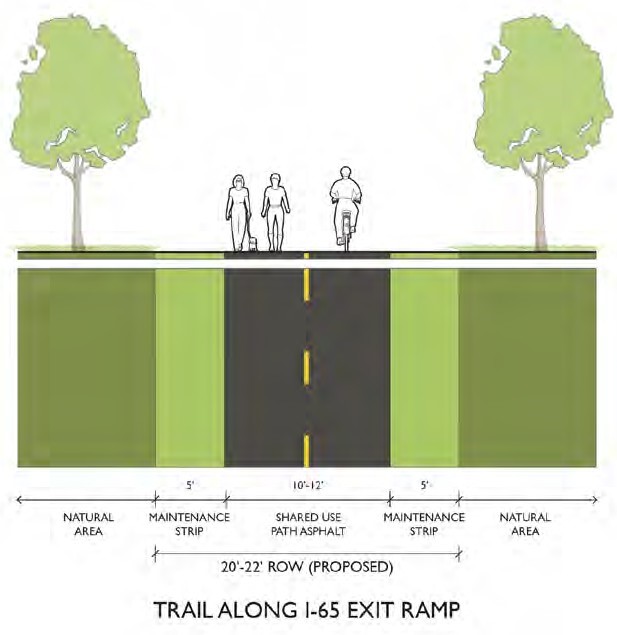 Consultants and the community have spoken about which option is the best to connect pedestrians and cyclists is traveling through the City of Brentwood from the east to the west in the future.  In May of 2018, Kimley-Horn and the Toole Design Group completed its study launched in the fall of 2017 with the goal to help identify a feasible route to safely cross Interstate 65.

At a January 23, 2018 community meeting, residents learned about each of the six proposed options.  Attendees were asked to vote for their top three choices while considering the trail length, probable cost, and degree of separation from the street, and number of properties affected for each option.  Option B1, using Concord Road through Tower Park and across I-65 Option C, using a multi-use path directly adjacent to Concord Road at Wilson Pike to Franklin Road, were the most popular options chosen by residents.

The design team ultimately recommended Option B1 as a final solution that best fits the needs of the City of Brentwood.  This option connects from the proposed multi-use path along Concord Road between Wilson Pike and Tower Park and heads north through Tower Park until reaching the park’s northern end. The route then continues west across I-65 by one of three options—taking advantage of the existing Little Harpeth River culvert, boring a new tunnel underneath the interstate, or traveling over the interstate by way of a new pedestrian bridge. Transforming the culvert into a usable path is the recommended solution by designers.  Once across the interstate, this route travels south along TDOT exit- ramp right-of-way until reaching Concord Road.   Then a multi-use path travels west along the north side of Concord Road and continues until reaching Franklin Road, heading north along the east side of Franklin Road until meeting the proposed protected intersection at Murray Lane.  The entire plan could cost between five and eight million dollars.

City Manager Kirk Bednar commented, “This study has provided us with some extremely good information for future planning purposes.  We knew at the beginning that there was not an easy or low cost solution.  Given the preliminary cost estimates in excess of $5 million and potential private property impacts, this is not a project the City of Brentwood can take on anytime soon.  We will use the study information for future capital projects planning efforts, and look to identify future grant opportunities at the appropriate time.” 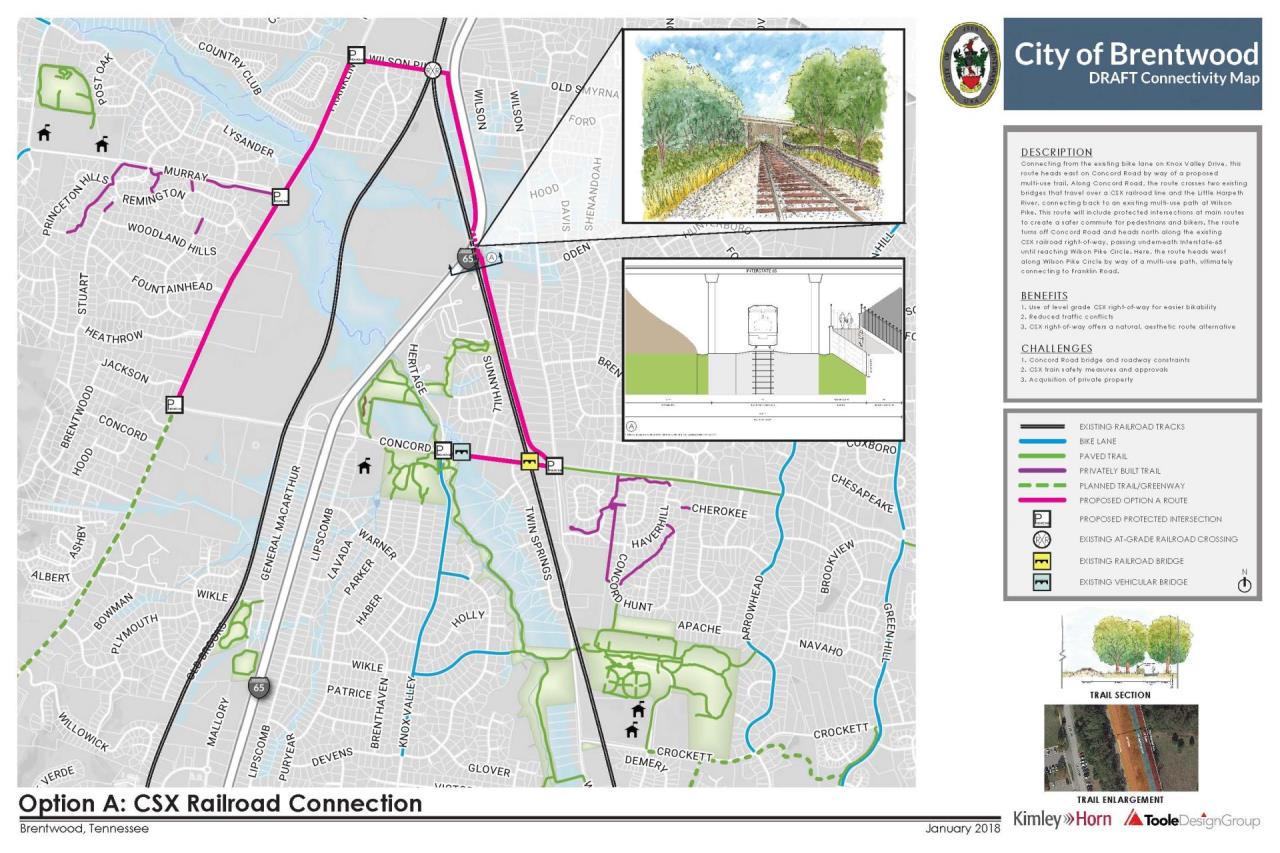 Connecting from the existing bike lane on Knox Valley Drive, this route heads east on Concord Road by way of a proposed multi-use trail. Along Concord Road, the route crosses two existing bridges that travel over a CSX railroad line and the Little Harpeth River, connecting back to an existing multi-use path at Wilson Pike. This route will include protected intersections at main routes to create a safer commute for pedestrians and bikers. The route turns off Concord Road and heads north along the existing CSX railroad right-of-way, passing underneath Interstate-65 until reaching Wilson Pike Circle. Here, the route heads west along Wilson Pike Circle by way of a multi-use path, ultimately connecting to Franklin Road.

Connecting from the greenway trails of Tower Park, this route heads west underneath Interstate-65 by one of two options: taking advantage of the existing culvert, or boring a new tunnel underneath Interstate-65. Once through, the route travels south along the TDOT exit-ramp right-of-way until reaching Concord Road. Here, the route travels west along Concord Road by way of a proposed multi-use path, crosses an existing bridge that passes over a CSX railroad line, and continues until reaching Franklin Road. 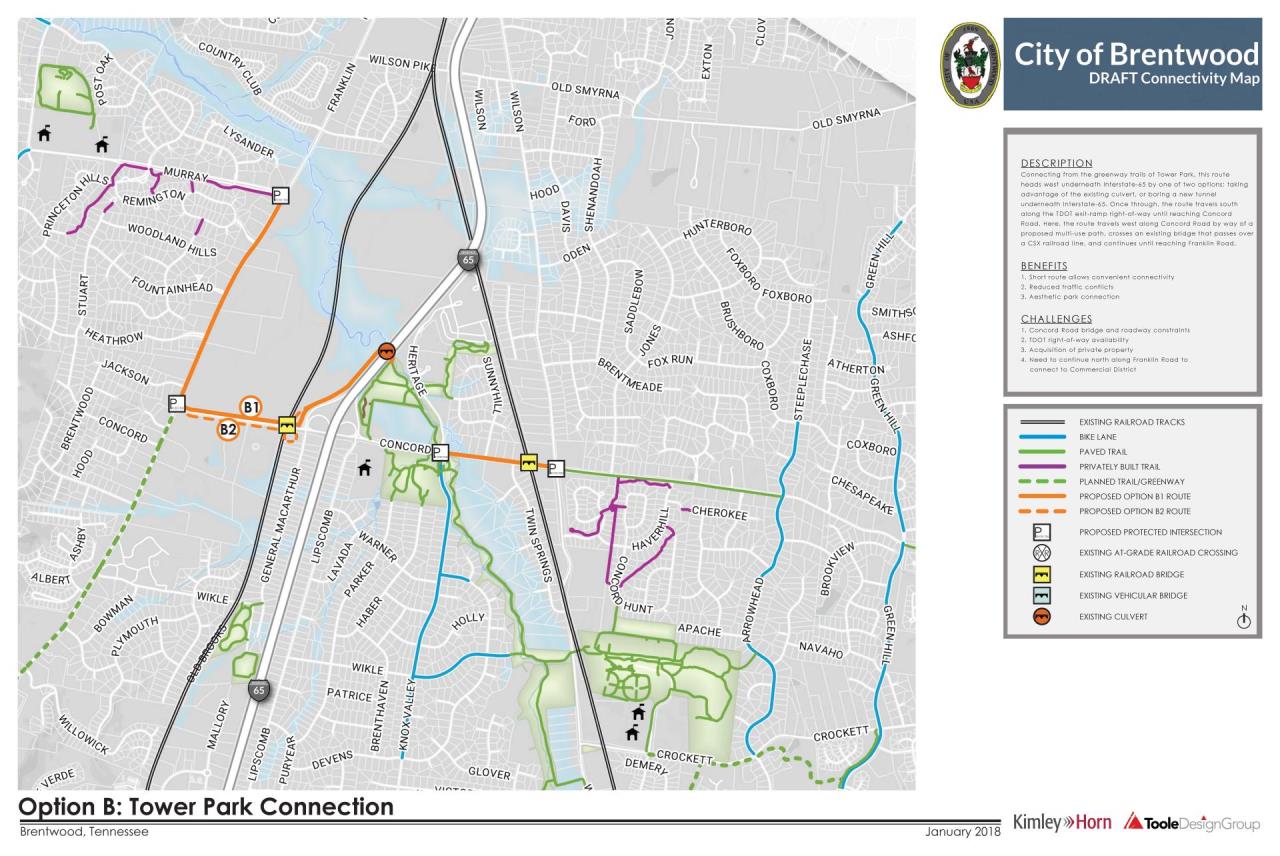 Connecting from the greenway trails of Tower Park, this route heads west underneath Interstate-65 by one of two options: taking advantage of the existing culvert, or boring a new tunnel underneath Interstate-65. Once through, the route travels south along the TDOT exit-ramp right-of-way and travels beneath the existing railroad bridge until reaching Concord Road. Here, the route travels west along Concord Road by way of a proposed multi-use path, crosses an existing bridge that passes over a CSX railroad, and continues until reaching Franklin Road. 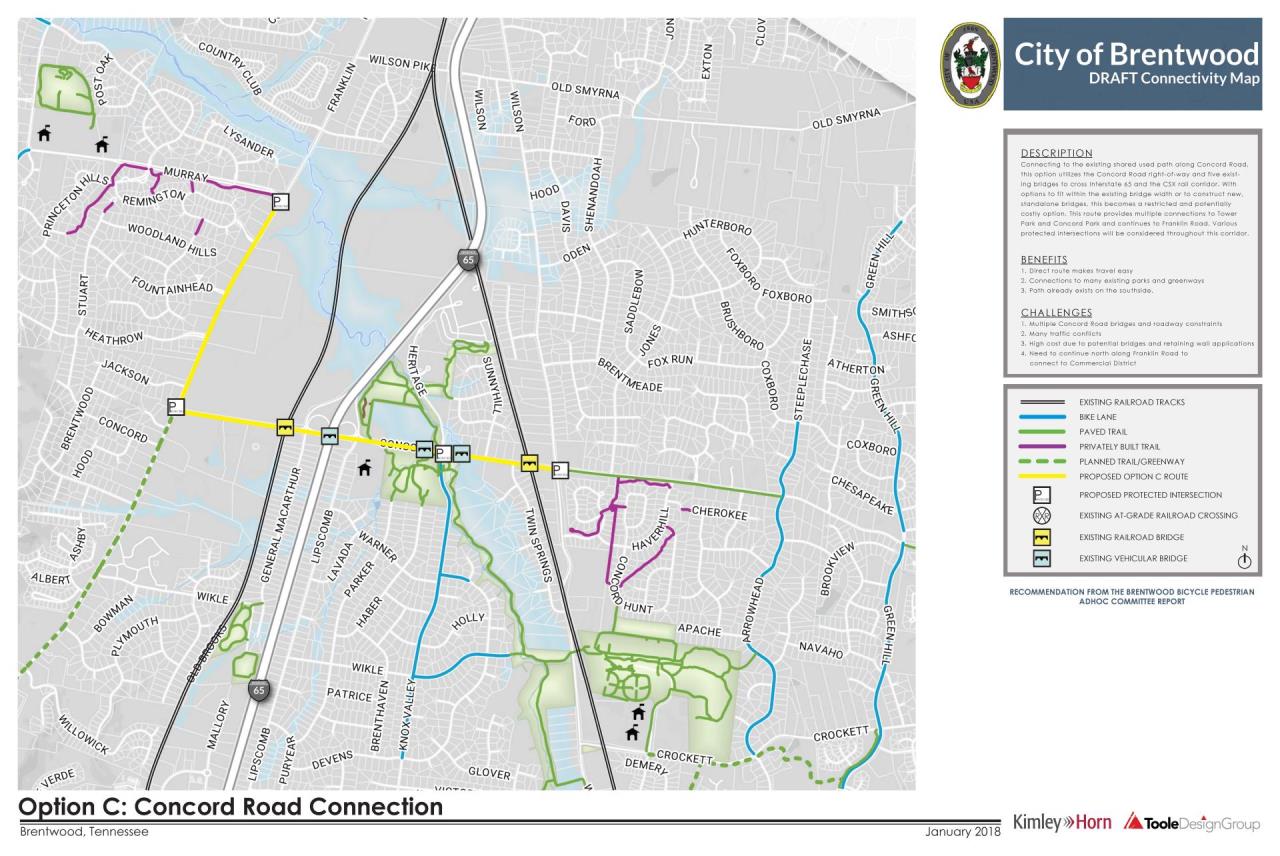 Connecting to the existing shared used path along Concord Road, this option utilizes the Concord Road right-of-way and five existing bridges to cross Interstate 65 and the CSX rail corridor. With options to fit within the existing bridge width or to construct new, standalone bridges, this becomes a restricted and potentially costly option. This route provides multiple connections to Tower Park and Concord Park and continues to Franklin Road. Various protected intersections will be considered throughout this corridor.

Connecting from Knox Valley Drive, this route travels west on Wikle Road by way of a shared-use travel lane. Once the route meets Interstate-65, it will transfer into a greenway trail, traveling over the interstate. Once over, the trail traverses north through Flagpole Park and Wikle Park until reaching Wikle Road once again, taking advantage of the existing at-grade crossing. Here, the route becomes a multi-use trail until reaching a proposed protected intersection at Franklin Road.

Connecting from the greenway trails of Tower Park, this route heads west under Interstate-65. Then the route travels north along the Little Harpeth River until reaching Franklin Pike. Here, it turns south until it reaches a protected intersection at Murray Road and Franklin Road.

In June of 2015, the Brentwood Board of Commissioners created a Bike and Pedestrian Ad Hoc Committee to provide the Board with recommendations for the short-term and long-term improvement or expansion of bicycle and pedestrian facilities and programs in Brentwood.  The Committee completed its report and delivered it to the City Commission in August of 2016.