Our knowledge of life in Brentwood begins in the 15th century, when several villages were developed by Native Americans of the Mississippian culture. The mounds they built, and the graves and artifacts found in the area, reveal but little about their traditions and way of life. Unfortunately, these people had no written language, and no accounts by explorers or other observers survive. It is clear that they lived in the area until sometime in the 16th century, with settlements at the current locations of Meadowlake subdivision, the Brentwood Library, and the Boiling Spring Academy. What caused them to leave remains a mystery.

In the years between the waning of those early Native Americans and the coming of white settlers, the Cherokee Indians used Middle Tennessee as a hunting ground. When early French and English explorers began hunting here around 1760, the Cherokee grew to mistrust and fear white encroachment on the land. For the next twenty-five years, Indians and whites killed one another in a battle for dominance.

Early provisions by the Kings of England gave to North Carolina all of the land from its Atlantic coast westward, stretching to unimaginable and uninhabited limits. During the Revolutionary War, North Carolina narrowed its claim to lands only as far west as the Mississippi River. To encourage settlement in the western part (which became Tennessee), North Carolina promised each soldier in its Revolutionary militia a grant of land in the “Military District,” an area of 100 square miles with Nashville at its center. After the war, these soldiers and those who purchased their claims began to settle in the area now known as Brentwood.

The Mayfield family were probably the earliest settlers in this area, on what is now Old Smyrna Road just east of Wilson Pike. Like others they built a home and outbuildings within a fortified stockade to protect family, land and livestock from the Indians. Sutherland Mayfield and two of his sons went outside the stockade one day in 1789 to work in the fields. Indians attacked, killing the father, one son and a farm hand. The other son, George, was captured and lived among the Indians for 12 years before he escaped and returned home. He became a friend and guide for Andrew Jackson in the War of 1812.

By 1795 white settlements had become so prevalent that the Indians no longer attacked families in Middle Tennessee. The rich land drew many settlers, and they prospered. John Frost came in 1810 and purchased the old Mayfield Station property. His home, Cottonport, became the center of business activity in the area. The general store, the grist mill and the post office (est. 1829) were located there on Old Smyrna Road. Another post office, Good Springs, was established on the McGavock plantation known as Midway, on the road to Franklin. Great plantations and small farms spread across the surrounding countryside. Churches and schools, were founded and community life expanded. The only remaining building from these years, other than homes, is the Boiling Spring Academy, opened in 1834(?) on what is now Moore’s Lane.

The Village of Brentwood

The community centered at Cottonport continued until the 1850s, when railroad fever swept the country. The Tennessee and Alabama Railroad secured the charter to construct a railroad from Nashville to Franklin and into northern Alabama. A gap in the ring of hills south of Nashville known as Atkinson’s Gap, named for a doctor and his family who lived there, was selected by the railroad as the best place to lay the tracks.

Francis Pecantet, a French-born lawyer who had married into the Atkinson family, was at that time teaching school and living on the Atkinson property. He formed a partnership with another ambitious man, James M. Hall, and together they devised a plan to lay out a village and sell lots along the railroad route (Church Street area). They named their imagined village Brentwood and began selling lots in 1856. Although not very successful, they did sell a few lots. The railroad began to operate, a store opened, serving also as the depot and post office, and Brentwood had its beginning as a little backwater town.

During the Civil War most of the families around Brentwood sided with the Confederacy. There were many slave-holders here, and the plantation economy was flourishing, as evidenced by the stately homes built by planters for their families. Sons and brothers left Brentwood in 1861 to join the southern army with high hopes.

The fall of Fort Donelson and the Union occupation of Nashville early in 1862 left Brentwood vulnerable. In the no-man’s land between the Union troops in Nashville and the Confederates to the south, families here were subject to raiding by both armies as supplies grew short and food was needed for the soldiers and their horses.

The somewhat anticlimactic “Battle of Brentwood” took place on March 25, 1863. Colonel Bloodgood and 400 men of the Union army were stationed on a knoll (now the corner of Maryland Way and Franklin Road). 300 additional soldiers were stationed in a blockhouse on the railroad at the Little Harpeth River. These Union troops were guarding the railroad that brought supplies to their army in Nashville. The fabled Confederate raiderGeneral Nathan Bedford Forrest sneaked up on Bloodgood and cut the telegraph wires so he could not call for reinforcements. Forrest positioned artillery to fire into the Union stockade, and forced Bloodgood to surrender after a short skirmish.

During the war many Brentwood homes were used for providing food and treating wounded soldiers, both Confederate and Union. By the end of the War, there were very few farm animals or growing crops left. The war left its scar on the economy and many homes, farms and plantations fell to ruin.

In the years following the Civil War the newly freed African-American slaves began buying property and establishing lives as free citizens. Many of these families purchased lots to the north and east of the depot and village center of Brentwood, in an area that would become known as Hardscuffle (Church Street). A school and churches were established by the community, and numerous homes were built there. A fatal blow struck Hardscuffle in the 1960s, when the new interstate cut through the area and destroyed most of the original village of Brentwood.

Brentwood continued to be a small village with outlying farms well past the middle of the 20th century. The invention of the automobile brought some increase in activity, allowing families to live in Brentwood and commute to Nashville to work and shop. The installation of the Interurban Railway that ran from Franklin to Nashville made the commute even easier. During the Great Depression of the 1930s, Brentwood became known for its night clubs and gambling casinos; its location on the line between two counties made it less susceptible to police raids and a popular place for honky-tonkin’. 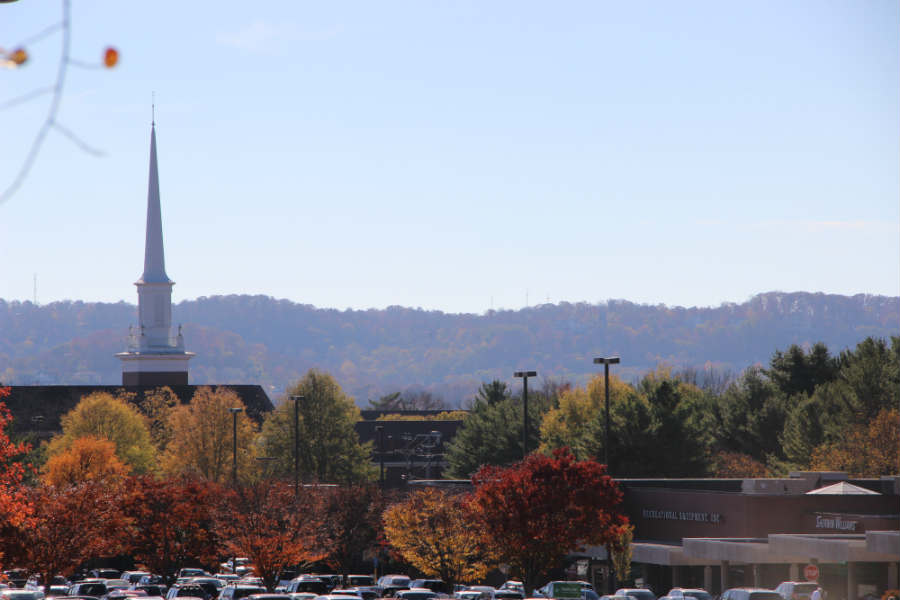 Brentwood was incorporated in 1969 with a population of 3,378. It is now a premier suburban residential/office community with a population of 37,060. Much of this growth was facilitated with the construction of I-65 in the 1960s, the construction of the Moores Lane interchange in the mid 1970’s and the Concord Road interchange in the late 1980’s. The development of Maryland Farms, Truman Ward’s prosperous horse farm, into a business park in the 1970s and 1980s brought an influx of thousands of workers every day, which led to the development of other businesses and services.

The vision that was shared by Brentwood’s early residents in establishing a low density residential community is still prevalent. About 90 percent of Brentwood’s acreage is zoned residential with a density standard of one dwelling unit per acre.

The easy accessibility to Nashville, the open country character of the area and the focus on quality land use and development has made Brentwood one of the most attractive and desirable growing communities in Tennessee.

We honor the contributions of the late T. Vance Little, City Historian of Brentwood, who collected and preserved Brentwood’s early history. We also thank John Oden for his recent research into the origins of the village of Brentwood and its development.